Motorsport fans are in for a treat this May, with two major events on the racing calendar. The festivities commence with the 12th Historic Grand Prix of Monaco (8–10 May), followed by the iconic Formula 1 Grand Prix (21–24 May). We give a rundown of the highlights.

All eyes will be on the Historic Grand Prix of Monaco from 8 to 10 May, as events kick off with the legendary classic car race. The big change this year is that the seven races, previously simply classified A to G, will now bear the name of a driver who marked the era of the series concerned: Louis Chiron, Juan Manuel Fangio, Vittorio Marzotto, Graham Hill, Jackie Stewart, Niki Lauda and Gilles Villeneuve. More than 220 Grand Prix and classic sports cars, selected for their historical value and degree of authenticity, will grace the mythical track of the Principality. This year’s event promises to provide three days of thrilling moments. In total there will be five distinct starting grids, covering the first 30 years of the Formula 1 World Championship. Over the three days, competitors will share their passion for the sport by racing on a legendary track, where 80% of the circuit is identical to that of 1929. 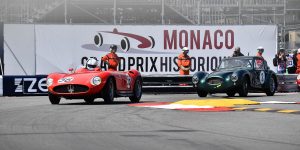 Charles Leclerc is now a household name in Formula 1, so it was only natural that the Automobile Club de Monaco pay tribute to the racing prodigy. The Monaco native made 10 podium appearances in 2019 and recorded 7 pole positions, more than any other driver. Last December, Scuderia Ferrari announced that it was extending his contract until 2024. “I hope I can win the Drivers’ Championship in 2020, but I’m happy to wait until 2021 if I have the title for sure,” confided Leclerc in an interview. “I think 2020 will be a very important year, with teams investing a lot because of the budget cap being introduced in 2021. The objective is still to aim as high as possible.” To celebrate the upcoming Monaco Grand Prix, held from 21 to 24 May, fans of the Monégasque driver can enjoy an exclusive Fan Pack allowing them to watch the race from a grandstand dedicated to the Ferrari driver. Ticket-holders will have two opportunities (chosen by lots) to meet their idol, as well as receiving several themed gifts, including a signed cap and a signed official programme. The 78th Monaco Grand Prix promises to be a weekend jam packed with sport, entertainment and festivities. Don’t miss the opportunity to take part, tickets are already on sale!
By Caroline Sempé