This is a very special year for the Monte-Carlo Television Festival, with the event marking its 60th edition from 18 to 22 June. To celebrate, certain changes have been planned, along with several surprises.

“There have been six decades of competition, thousands of fiction and news programmes screened, awards presented, winners named, Golden Nymphs bestowed, talent honoured and miles of red carpet walked,” says Laurent Puons, CEO of the Festival. “When an event 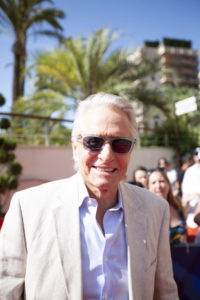 celebrates its 60th anniversary, one might say it has reached the age of reason, an age when it looks back over its history, an apt time for change,” he goes on. “It appreciates its worth and accepts its origins. Having now become unmissable, it displays great assuredness and naturally commands recognition for its success.” To kick off this anniversary edition in spectacular style, the Festival held a unique reception in Los Angeles in February 2020, attended by a host of Hollywood stars. Some 250 illustrious guests, including actors, actresses, directors and producers, as well as former jury presidents, winners of the Honorary Golden Nymphs and Crystal Nymphs, joined H.S.H. Prince Albert II for a glamorous evening at the Sunset Tower Hotel.

Gearing up for the 2021 edition
The Festival kicks off on 18 June at the Grimaldi Forum, with a preview screening of a TV series. The rest of the Festival will feature round-table discussions and conferences dedicated to professionals, but also screenings and a variety of other public events. Everything will be arranged to allow for the current health situation, so that everyone present at the Festival has a safe and enjoyable time. As always, the Festival will celebrate the hottest television series and bring together the biggest stars in Monte-Carlo, to the great delight of fans. Michael Douglas, Jessica Alba, Eva Longoria and Jason Priestley are just some of the celebrities to have graced the red carpet over the years.

Among the changes planned for this year, the Festival has reconfigured its famous Golden Nymph Awards. The films and series produced for digital platforms or TV are now all classed together as “Fiction”. All the programmes in this category will be specially featured and will be screened throughout the Festival. The News category is also evolving and is now divided into three sections: news coverage, news documentary and documentary film. Finally, the Prince Rainier III Prize has become a completely separate category, the Monte-Carlo Television Festival partnering with the Prince Albert II of Monaco Foundation to organise it. As Laurent Puons explains, “all of these changes are part of an ongoing monitoring strategy that has been put in place in recent years, confirming the Festival’s dominant position in Europe. Promoting international TV programmes and constantly adapting to changes in the industry are part of the Monte-Carlo Television Festival’s DNA.”