A commitment to a perpetual planet

The iconic brand confirms its commitment to creating a better world with its Perpetual Planet initiative through the Rolex Awards for Enterprise that recognize individuals with projects that advance knowledge and protect human well-being and the environment. 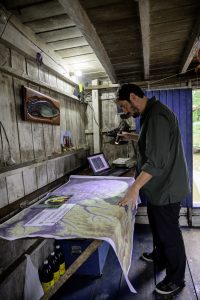 Set up in 1976, the Rolex Awards for Enterprise have supported no less than 150 Laureates whose work is helping to expand human knowledge, improve living conditions and protect our planet. This year’s awards were no exception and reconfirmed Rolex’s commitment with the launch of the Perpetual Planet initiative, designed to assist the explorers of today in their new mission to make the planet perpetual. The initiative includes a partnership with the National Geographic Society to study the impacts of climate change as well as Sylvia Earle’s Mission Blue initiative to safeguard the oceans through a network of marine protected “Hope Spots”.

957 candidates from 111 countries
This year, for the first time in the 43-year history of the Awards, the public was invited to take part in the selection process by voting online for its favourites among the 10 finalists chosen from a field of 957 candidates representing 111 countries. The jury, whose members included Jonathan Baillie (Great Britain), a global authority on the world’s most threatened species, Laurence de la Ferrière (France), a mountaineer, explorer and writer, and David Gruber (United States), a marine biologist and National Geographic Emerging Explorer, then chose the five Laureates. The final recipients include young Brazilian biologist João Campos-Silva, chosen for his project to save from extinction the giant arapaima, the world’s largest scaled freshwater fish. His project also involves working closely with local associations and fishing leaders to safeguard the livelihoods and culture of rural Amazonian communities who depend on the region’s rivers for their survival. Another Laureate was Miranda Wang, a young Canadian entrepreneur and molecular biologist based in California, selected for her innovative process to turn unrecyclable plastic waste into valuable chemicals for use in the automotive and electronics sectors.

New initiatives and ongoing projects
The five Laureates will benefit from Rolex’s support in advancing their work. The Rolex Awards are unique in seeking to recognise new initiatives and ongoing projects. Applications are open to anyone over the age of 18; there are no academic or professional requirements and no restrictions on gender or nationality. Anyone with a project focusing on the environment, science and health, applied technology, cultural heritage or exploration may apply. Previous Laureates include a Parisian taxi driver who became a world authority on Nepalese ground beetles and a Mexican biochemist who became an expert on his country’s folk music. Think you have what it takes? Applications for the 2021 Rolex Awards are now open.