Secrets of the Prince of Monaco’s cars

Fans of automobile history, rally enthusiasts and followers of Formula 1 alike will all want to visit the SAS Prince of Monaco’s Cars Collection.

In summer 2022, the HSH Prince of Monaco’s Cars Collection, which opened to the public in 1993, moved to its new location in Port Hercule, opposite the Automobile Club de Monaco and next to the famous Grand Prix racetrack. Started in the 1950s by Prince Rainier III, the collection now comprises around one hundred vehicles, ranging from horse-drawn carriages with the coats of arms of Prince Charles III and Prince Albert I, to MC One, the flying car made in Monaco. The exhibition design is by Pascal Payeur (Espositif studio), who previously designed an exhibition for the Musée des 24 Heures du Mans in the 1990s. It takes visitors on an exciting journey exploring Prince Rainier III’s passion for cars, with themes such as the the Riviera and Les Elégantes (produced with the assistance of the SBM’s heritage department), illustrated by videos and personal images of the Grimaldi family. The upper floor showcases the racing cars (sports, F1 and rally), including the Ferrari with which Charles Leclerc won Spa and Monza, and the legendary Lamborghini Miura designed by Bertone in 1967, in brash yellow with headlights framed by eyelashes. We focus on some of the collection’s most iconic vehicles and their secrets, as told by the museum’s director, Valérie Closier.

The first car in the collection
It all began with the 1903 De Dion Bouton. “This is the first car Prince Rainier bought when he was a student in 1953. He drove it in the 1968 London to Brighton rally, one of the biggest gatherings of classic cars in the world.” The royal couple brought their three children along. When he arrived in Brighton, Prince Rainier told a British television reporter that he had taken part in the race “just for fun!” Rainier III had already driven in a motor race in 1953 under the name of Louis Carladès in a DB Frua. He didn’t stay incognito for long. “He was quickly recognised.”

A car with a propeller!
The Hélica always attracts attention. This car with a propeller, invented by Marcel Leyat, was so incongruous that it was described at the time as a wingless plane or a chopper on wheels. Its double-bladed propeller (with an average diameter of 1.40 m) was the size of a small plane. The unusual machine had a top speed of 110 km/h.

The car that starred in To Catch a Thief

The 1954 Sunbeam Alpine MK1 was bought by Prince Albert II, and is a nod to his mother’s acting career. The sapphire blue convertible two-seater coupé is an exact replica of the convertible used in Alfred Hitchcock’s film To Catch a Thief starring Grace Kelly and Cary Grant. “If you look closely, you’ll notice that two models were used, one in the studio and one on the road. In some scenes Grace Kelly changes gears below, and in others under the steering wheel.”

The collection director’s top three
“Of the classic cars, my favourite is the 1928 Lincoln Type L roadster. The two-tone model is incredible, with unique details such as the leather straps, the mirror attached to the spare wheel, and the white sidewalls on the wheels.” Valérie Closier, who is a champion French co-driver, also loves the Alpine, “her favourite car that drives like a go-kart,” and Nigel Mansell’s 1989 Ferrari 640 which has “magnificent, pure curves”.

Princesse Grace’s British taxi cab
With its beautiful black paint, elegant design and retro appeal, the London black cab is one of the United Kingdom’s icons. Princess Grace also fell in love with the Austin FX3, and had one brought over from England. “This car has a very tight turning circle which is perfect for driving through the streets of Monaco-Ville.” The vehicle’s interior was completely redesigned by the Princess herself. As a child, Prince Albert would sometimes travels in the luggage compartment located in the front of the taxi, and separated by a little chain.

The legendary Chrysler Imperial is associated with the “marriage of the century” of 1956. “Prince Rainier had it brought over from the US and drove it to meet Grace Kelly when she arrived by luxury liner on 12 April 1956, before taking her to the Palace.” The limousine was also part of the royal wedding procession and was used for official visits, for example that of General de Gaulle in 1960. It was originally green, but was repainted in black and silver, colours that were more suitable for a Head of State.”

The Bugatti in the first Monaco Grand Prix
Driven by Marcel Lehoux in the first Monaco Grand Prix that took place in 1929, this eight-cylinder Bugatti takes its place alongside the other race cars. The vehicle has a 100-litre tank (with terrible consequences in the event of a collision), a top speed of 200 km/h, and is as light as a modern F1 race car. At the time, driver safety was almost non-existent: there were no seatbelts or helmets, and the best protection came in the form of a headband. 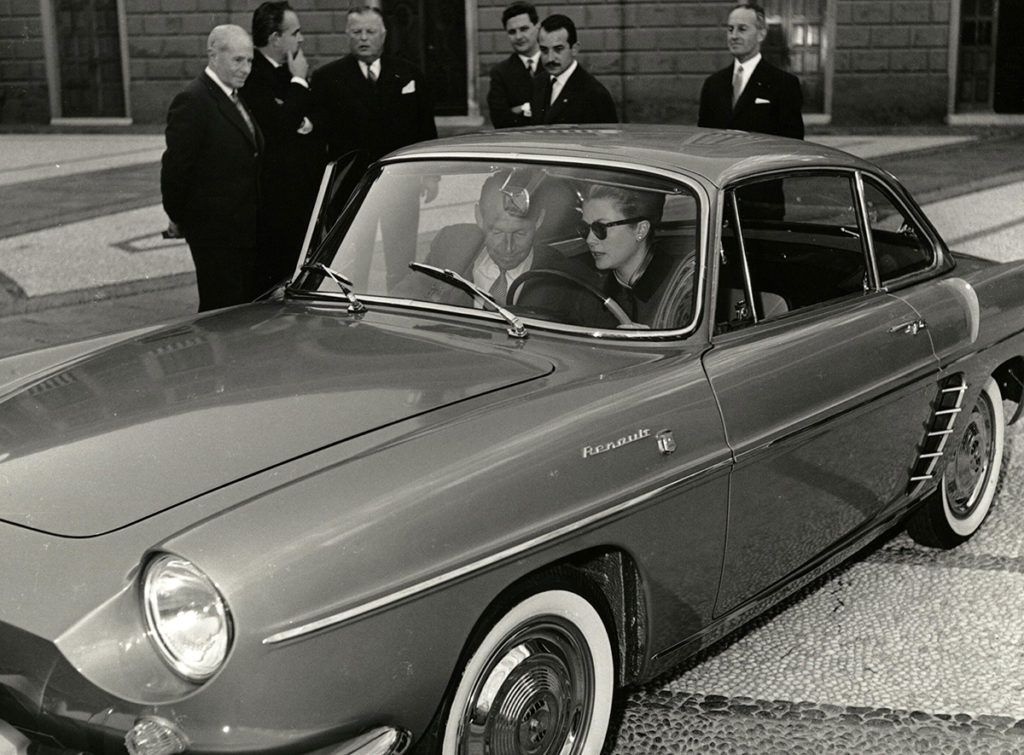 Renault’s management gifted a Floride in “Borneo green” to Princess Grace in 1959. “They also offered a white model to Brigitte Bardot, and a third model to Queen Elizabeth II (which no-one knew about). The Queen declined the gift and asked them to donate it to a British charity instead.” The streamlined cabriolet coupé has barely 7,000 km on the clock, and was known as the Caravelle on the US market.