Each month has its flagship ingredient. And each month one of the chefs at the Resort offer a different recipe based on a fruit or vegetable at the peak of its season.

The locavore movement, which brings people back to their roots, is gaining ground all around the world. It’s hardly surprising; fresh fruit and veg taste better and are more nutritious than those that have crossed continents and oceans to get here. That’s why award-winning chef Joannes, director of culinary events at Monte-Carlo Société des Bains de Mer, is running a new project for the group’s various establishments. He selects the fruit and vegetables and each chef at the Resort dreams up a recipe for his restaurant. “I love a challenge,” says Joannes, who has worked in the kitchens of many noted restaurants. Véronique Liesse, the dietician at Thermes Marins de Monte-Carlo, has told us about the virtues of this winter’s flagship fruit and vegetables.

It’s the ultimate detox fruit after the festive season’s excesses, for example. “Pineapple is very refreshing and flavoursome, but that’s not all. It’s rich in bromelain, an enzyme that chops up protein molecules in the gut, so it facilitates digestion and reduces gastric acid. But avoid pineapple if you have a stomach ulcer. Bromelain can also fluidify the blood and strengthen blood circulation. Pineapple is rich in Vitamin C and antioxidants, so it’s good for the immune system. It’s also a source of manganese, which helps to reduce the risk of bone loss and osteoporosis.” Ken Thomas, the chef at Pôle Sucré, the biggest pastry shop in Monaco, does caramelised roast pineapple with a coconut biscuit.

FEBRUARY
Cauliflower to boost your mood 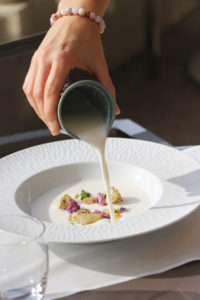 “Cauliflower is top of the class. It has some very
valuable nutrients whether cooked or raw. It is a Brassica (a group that covers all the cabbage
family), very low in calories but rich in vitamins,
minerals and fibre. In particular, it has vitamin C, which is an excellent antioxidant. But vitamin C is easily destroyed by cooking, so it’s best to have your cauliflower al dente. It also has vitamin B9 (folic acid), which makes it a great food for pregnant women and athletes but also boosts mood and protects against cardiovascular disease (which the vitamin K in cauliflower also does). Cauliflower contains indole, which is a valuable anti-cancer compound, and soluble fibre, which is good for the intestines.” Chef Basile Jean-Laurent at L’Hirondelle makes a smooth soup from yellow and purple cauliflower. It’s served with a walnut biscuit. 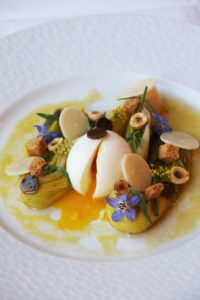 “Leeks belong to the Allium family (like onions, shallots, garlic and chives). Leeks are low in calories, and their high water and fibre content makes them good for the digestion. They provide minerals like potassium, magnesium and calcium, making them diuretic and so preventing water retention. Their vitamin content (C, B9, B3 and K) varies between the different parts of the leek. This is even more true of their carotenoids, antioxidants of which there are 100 times more in the green part than the white. The green part is good in soups.” Richard Rubbini, head chef of the Casino restaurants, does a leek vinaigrette with fennel sauce. Fennel is another very low-calorie food with digestive and diuretic properties. “Fennel also comes as fennel seed, whose anti-inflammatory properties for the respiratory tract are officially recognised by the health authorities”. 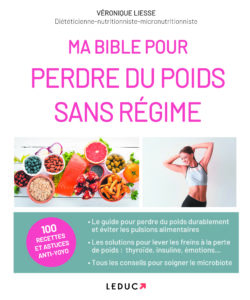