An appeal for the oceans

The Crested Cormorant, Sardinian Warbler and protected species such as the Yelkouan Shearwater are among the many migratory birds that visit Pointe de la Vigie, a wildlife refuge designated by the League for the Protection of Birds.

It is my duty to play my part in the challenge launched at my generation: to find solutions to protect our planet, our most precious asset,” states Prince Albert II of Monaco. And in response to this challenge, the Head of State has decided to put pen to paper. In his first book, L’Homme et l’Océan. Préservons les océans pour protéger l’humanité (Man and the Ocean. Preserving the oceans to protect humanity), published by Flammarion, he explains the Grimaldi family’s deep connection to the environment. We learn about Prince Rainier’s battle with General de Gaulle “to prevent the installation of a nuclear waste dump off the coast of the Principality”, and about his own personal environmental campaigns waged through the projects supported by his foundation, which he created at the start of his reign. 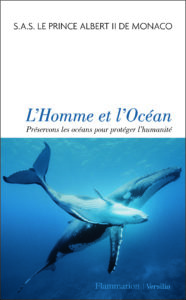 Like his great-grandfather Albert I, the father of oceanography, Albert II has travelled to the North Pole: this expedition enabled him to “feel directly” the effects of global warming. He brought back a photo taken in the same location visited by his grandfather 100 years earlier. The contrast between the two images is striking: “In the older one, a mountain of ice advances towards the photographer, dominating and almost crushing him. In mine, the glacier has disappeared. It has given way to a lake surrounded by severe black rocks,” writes Prince Albert II in his essay, whose goal is to raise awareness of the importance of the oceans. Marine and coastal ecosystems play a vital role as climate regulators, acting as carbon sinks and heat pumps, preventing erosion and mitigating the impact of tsunamis. However, water pollution and intensive fishing practices are jeopardising this balance. This is why “we must act, and quickly!” urges Albert II, who hopes to see the creation of many more marine protected areas and the introduction of penalties for environmental crimes – sooner rather than later.