Honey harvested in the surrounding region is eaten at breakfast and in desserts. We talk to Dimitri De Andolenko, purchasing director and sustainable development manager of the Monte-Carlo Société des Bains de Mer Group.

How did you begin producing your own honey?
We have wanted to have better traceability on our honey purchases for years. The problem is that a honey can be local or include blends of European and non-EU honeys, sometimes with the addition of glucose. So we approached a group of regional beekeepers who wanted to set up an apiary using traditional know-how. They are five friends who all have jobs and do beekeeping in their spare time. In 2018 we decided to finance around forty hives, and chose the black bee, the region’s endemic wild species. It is a responsible, low-impact production, with hives in Guillaumes, Entraunes and Daluis, located far from intensive agricultural zones with a low risk of being attacked by Asian hornets. Only the surplus honey is harvested. In the spring, when the brood was acclimatising, we harvested about 100 kg, and in 2019 we increased to 430 kg with 73 hives. We then began the process to obtain Ecocert certification, which is awarded to organic honey.

What challenges have you faced?
After two quiet winters, we noticed significant bee mortality in 2020, and by the end of winter 2021 there were only about thirty hives left. We called a company who works with researchers from INRA and CNRS. The problem was caused by the varroa parasite, one of the major factors that weaken colonies. We decided to apply a gentle treatment to protect the swarms. We want to stick to around fifty hives for the time being so we can understand their ecosystems better, with the contribution of the Prince Albert II Foundation. The idea is not to build to an intensive production, but to respect biodiversity, with the expert advice of the scientific community. This requires regular and rigorous monitoring of the hives. Our goal is to exceed 580 kg of honey within two to three years, which represents one sixth of what we use in a normal year, focusing on the gastronomic establishments and the sweet area in One Monte-Carlo.

Have you considered installing hives in the city?
Yes, we initially thought about putting hives on the roof of the Casino de Monte-Carlo or the Hôtel de Paris. In general, urban honey is considered to be of good quality because it is multifloral, but in reality its quality is very controversial because of the toxic gases in town. And, we didn’t want to risk a swarm for the safety of our customers and neighbours. In urban areas, bees are also attacked by the Asian hornet, a dangerous predator that is adept at hiding from its prey. We preferred to locate our hives in the surrounding region, but close enough for our green teams and staff to visit. We have also invited each of our establishments to sponsor them.

Where can we find honey from your hives?
The production is distributed on a pro rata basis to our various establishments, according to our staff’s creative input. For example, chef Philippe Joannes, director of Culinary Events, and his team, makes an ice cream with our honey and uses it in his pastries. It also features in our breakfasts, and is sold directly at Mada One. What’s really interesting about this honey is that it comes from different altitudes, because the bees are moved throughout the season depending on the temperatures. If the honey comes from an altitude of 900 m it tastes different from honey produced at 2,000 m, where there are a lot more thorn bushes, which give it a different taste and a unique aromatic richness. 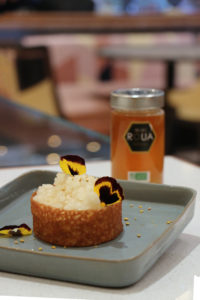 
OUR CATEGORIES OF SERVICES