The delicious coffees produced by French roaster Malongo have been chosen by the resort to be served at breakfast in all its hotels, as well as in its reception areas, and in the Thermes Marins Monte-Carlo.

This decision was made to help guarantee stable employment and pay for local coffee plantation workers by ensuring them a fair purchase price. Fair trade coffees developed thanks to roasters such as Malongo, who started out in Rue Lépante in Nice in 1934 and continue to operate in Carros to this day. The family-run SME based on the French Riviera is a long-term partner of NGO Max Havelaar France, and has become the world leader in certified coffees produced using artisanal methods by cooperatives with whom it has forged special relationships.

“Women play a leading role in this sector,” explains Constantin Kakule Masinda, president of the Coopérative Paysanne de Développement in the Democratic Republic of Congo. Women are not only involved in production but hold 30% of the positions on the board of directors. Coopade coffees boast an excellent location on the equator that enables them to harvest twice per year. They are mainly grown near Lac Edouard and Virunga National Park, which is home to three critically endangered species of great apes. More than 5 million people live within an hour’s walk of the park, including 40,000 who work in the coffee sector. The economic activity and jobs created by these cash crop farms help reduce poaching and illegal deforestation, and make it less attractive for young people to join armed militia groupss. They also bring a sense of hope and pride to a community that has often been marginalised. Likewise in the case of the Kawakanzururu Cooperative, a fair trade company that helps local communities gain access to drinking water, primary healthcare and schools, and also protects the National Park. By selecting Malongo fair trade coffees for its establishments, Monte-Carlo Société des Bains de Mer has chosen to support this ethical industry and to raise customer awareness of this issue, given that only 5% of certified fair trade coffee is consumed in France.

Mada One, a MaConsigne partner restaurant 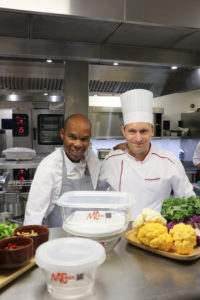 Yes, you can get a takeaway meal without disposable packaging! To tackle the pollution caused by single-use plastic containers, the Monaco government has introduced the MaConsigne system. When you order a meal from a MaConsigne partner restaurant it comes in a glass container that can be returned within 14 days. To do that you take it to one of the collection points installed around town. There’s a free downloadable mobile app to help you locate the nearest one. All year round, you can buy a meal from partner restaurant Mada One in a reusable MaConsigne container. Mada One is the restaurant in One Monte-Carlo where chef Marcel Ravin cooks up snackonomic delights with flair and high style.