Josephine Baker’s aura is still present in Monaco, where she is celebrated as a bright artist who enjoyed a close friendship with the princely family.

On 30 November, Josephine Baker will enter the Panthéon mausoleum in Paris, the sixth woman to be honoured in this temple of the French Republic. It is a distinction worthy of her amazing life story. She shone on stage, of course, headlining the Parisian revues of the 1920s, but also in life, becoming a key figure in the French Resistance and later joining Martin Luther King as a civil rights activist. Following the wishes of her children, her body will remain buried in the Monaco cemetery, where she was laid to rest in 1975. Her presence in the Panthéon will therefore be marked by a cenotaph bearing her name. The same day, Monaco will pay tribute to her with a party hosted by the Bar Américain, during which a live band will play Joséphine Baker songs with a jazz flavour, while columnist and journalist Alex Jaffray will review her life in Monaco in pictures, screened at 7pm and 10pm. 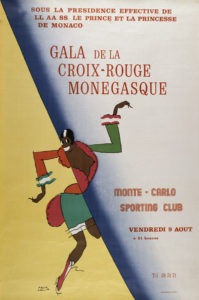 The queen of the music hall
The memory of the famous singer and dancer still shines on in Monaco, and on 25 September 2021 the Principality inaugurated a square in her honour, Place Joséphine Baker in the Larvotto district. A Charleston tune accompanied the ceremony, which was as joyful and wild as the artist’s early shows in the Roaring Twenties. In 1925 the young woman left segregationist America, turning the page on a miserable childhood to seek her fortune in Europe. She headed to Paris where she began performing in the Revue Nègre at the Théâtre des Champs-Elysées. Before long the show was selling out. Her skimpy costume and banana skirt caused a scandal but propelled her into the spotlight, where she would remain for years to come.

Unbreakable bonds
But her luck changed. Through her extravagant lifestyle, excessive generosity, and mismanagement of the tourist complex she had created in the Dordogne, Josephine Baker went into debt. In 1968, her Château des Milandes property was sold for a pittance. At 62, she had lost everything. Yet she managed to get back on the road to success – in Monaco. At the request of Princess Grace, she returned to the stage in August 1969 for the Monaco Red Cross Gala. Soon after she moved into a house in Roquebrune-Cap-Martin, with the help of Grace of Monaco, who became a close friend. She took part in more prestigious galas, such as the inauguration of the Monte-Carlo Sporting Club in June 1974 by the Société des Bains de Mer. An old SBM logo even recalled Josephine Baker’s feather costume. A month and a half later, she was back on the same stage with a flamboyant musical revue that looked back over her life. It was a landmark show, solidifying the close bonds that united the singer with the Principality. Her magnificent story is told in Joséphine Baker à Monaco, produced by the Monte-Carlo Société des Bains de Mer group. The book will be offered to guests at the party hosted by the Bar Américain of the Hôtel de Paris Monte-Carlo.