Having taken the helm at ÔMER, Alain Ducasse’s second restaurant in Monaco, Patrick Laine is treating diners to a cuisine that combines all the flavours of the Mediterranean.

Curious, observant and with a thirst for new flavour sensations, this Lyon-born chef has spent the past 20 years working alongside Alain Ducasse. As the new head chef at ÔMER, the Hôtel de Paris Monte-Carlo’s restaurant, Patrick Laine is determined to treat diners to a taste-bud tantalising cuisine. When he looks back at his career and his earliest culinary memories, he recalls his grandmother, with whom he first learned to cook and decided to be a chef. After completing his studies in hotel management, Patrick realised that he wanted to join the big league. “I decided early on that I wanted to work in the most prestigious establishments and once I’d graduated, I sent my CV to every three-starred restaurant in France.” It was Alain Pic who eventually gave him a chance. 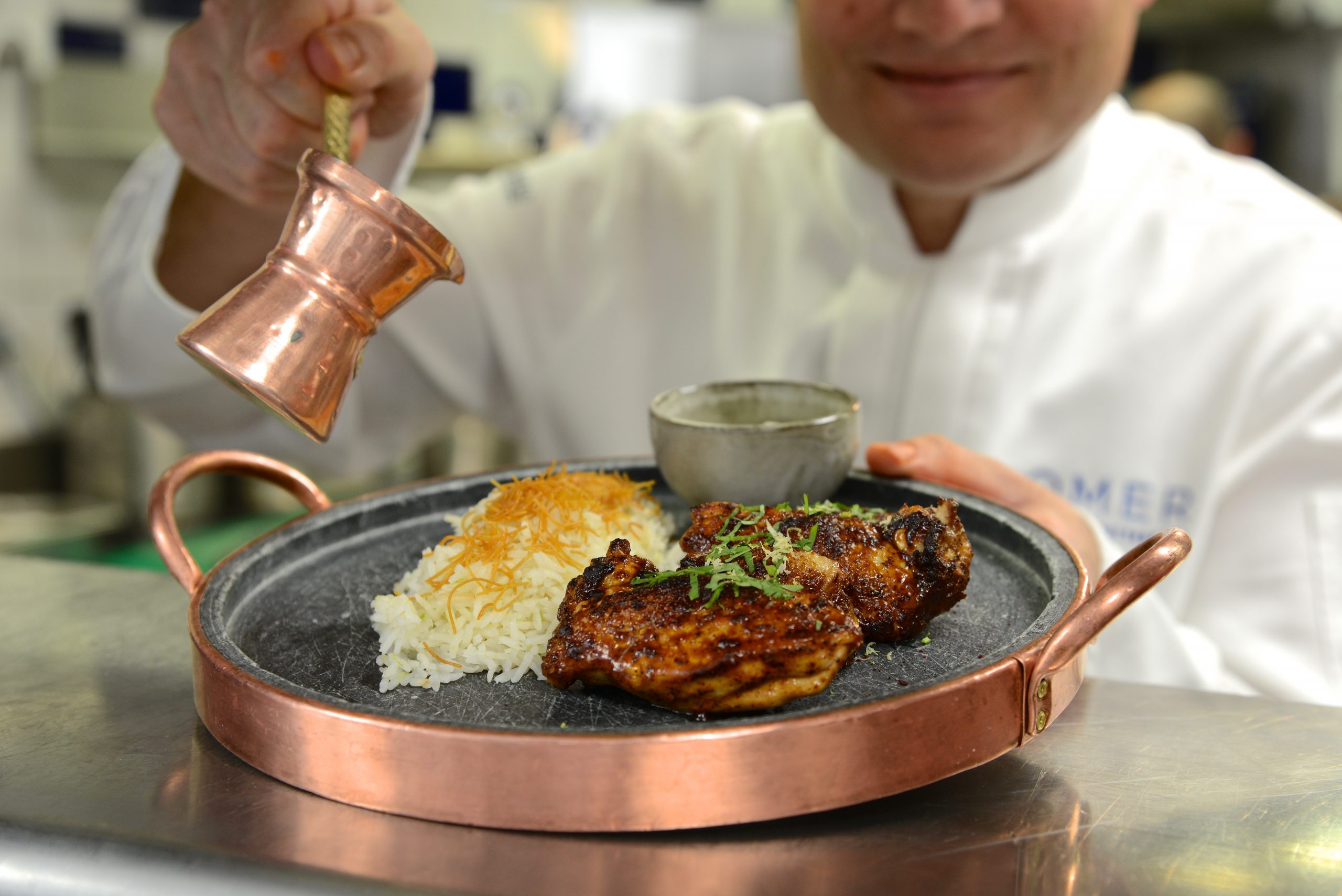 “I remember Anne-Sophie working alongside her brother in the kitchens. It’s funny to think she’s now a three-starred chef herself.” After two years at Maison Pic, Laine left Valence to carry out his military service in the kitchens of the Ministry of the Interior. In 1996 he joined Marc Veyrat’s restaurant and learned that “attention to detail is everything”. The following year brought yet another change of culinary universe when he became a commis chef at Le Louis XV. “I’ve worked my way up over the years. Having occupied all these different positions allows me to see the big picture and understand exactly what is expected of us.”

“Attention to detail is everything”
As regulars and holidaymakers rave over the new menu at ÔMER and its heady aromas, Patrick Laine confides that he took inspiration from traditional Mediterranean recipes. A paella de marisco laced with saffron and pimientos, or an oven-roasted red mullet wrapped in vine leaves and served with garlic- and za’atar-spiked autumn vegetables, are just some of the new discoveries that await. There are also mezzes to share for those wanting a more convivial experience. “We believe in the importance of respecting each product, ensuring harmonious flavours and paying attention to presentation. Our dishes must be as pleasing to the eye as they are to the palate.”

This Christmas, the menu will feature the traditional Provençal Thirteen Desserts as well as other festive delicacies, including scallops, king prawns and caviar. Determined not to rest on his laurels, Patrick Laine plans to regularly welcome foreign chefs to his kitchens in order to trade inspiration. “Last June, Dina Nikolaou made me a Greek salad with watermelon. It was unusual but delicious. I enjoy rewriting the rules and introducing new flavours.”  Lovers of new culinary experiences take note: ÔMER has a host of wonderful surprises in store.
By Caroline Sempé